Eaton Vance Worldwide Health Sciences Fund (Trades, Portfolio) disclosed its equity portfolio for the second quarter earlier this week.
Managed by Jason Kritzer and Samantha Pandolfi, the fund, which is part of Boston-based Eaton Vance, invests heavily in the health care space. The portfolio managers look around the world for securities that are not only reasonably priced, but are expected to grow in value over time.
NPORT-P filings show the fund entered three new holdings during the three months ended May 31, sold out of two stocks and added to or trimmed a number of other existing investments. Eaton Vance’s most notable trades included new positions in Zimmer Biomet Holdings Inc. (

TFX, Financial) bet and a reduction of the Abbott Laboratories (

ABT, Financial) holding.
Investors should be aware that, just like 13F filings, NPORT-P reports do not provide a complete picture of a guru’s holdings to the public. Filed by certain mutual funds after each quarter’s end, they collect a wide variety of information on the fund for the SEC’s reference, but in general, the only information made public is in regard to long equity positions. Unlike 13Fs, they do require some disclosure for long equity positions in foreign stocks. Despite their limitations, even these partial filings can provide valuable information.
Zimmer Biomet
The fund invested in 146,300 shares of Zimmer Biomet (

ZBH, Financial), allocating 1.63% of the equity portfolio to the position. The stock traded for an average price of $122.41 per share during the quarter.
The Warsaw, Indiana-based medical device company, which manufactures orthopedic reconstructive implants, supplies and surgical equipment, has a $23.08 billion market cap; its shares were trading around $109.94 on Wednesday with a price-earnings ratio of 106.92, a price-book ratio of 1.92 and a price-sales ratio of 3.03.
The GF Value Line suggests the stock is modestly undervalued currently based on historical ratios, past financial performance and future earnings projections. 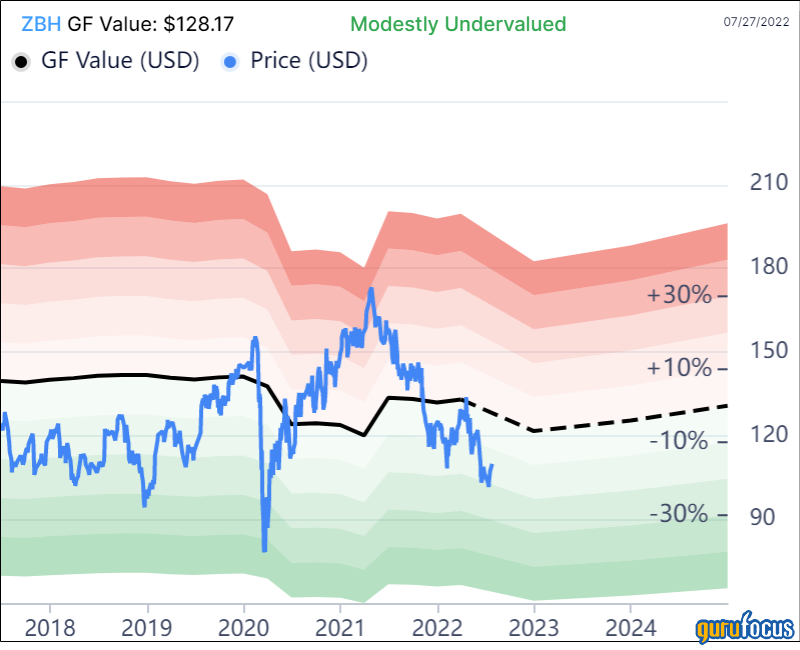 GuruFocus rated Zimmer Biomet’s financial strength 5 out of 10. In addition to having insufficient interest coverage, the Altman Z-Score of 2.56 indicates the company is under some pressure. In addition, the weighted average cost of capital overshadows the return on invested capital, meaning it is struggling to create value while growing.
The company’s profitability fared better with a 7 out of 10 rating. While the operating margin is declining, the returns on equity, assets and capital outperform at least half of its competitors. Zimmer Biomet also has a moderate Piotroski F-Score of 6 out of 9, suggesting conditions are typical for a stable company. Due to declining revenue per share over the past several years, the predictability rank of one out of five stars is on watch. According to GuruFocus research, companies with this rank return an average of 1.1% annually over a 10-year period.
Of the gurus invested in Zimmer Biomet,

PRIMECAP Management (Trades, Portfolio) has the largest stake with 2.35% of its outstanding shares. Dodge & Cox, Hotchkis & Wiley and the

XBI, Financial), giving it 1% space in the equity portfolio. Shares traded for an average price of $80.91 each during the quarter.
The exchange-traded fund, which tracks the performance of the S&P Biotechnology Select Industry Index, was trading around $81.76 on Wednesday. It has declined nearly 30% year to date. 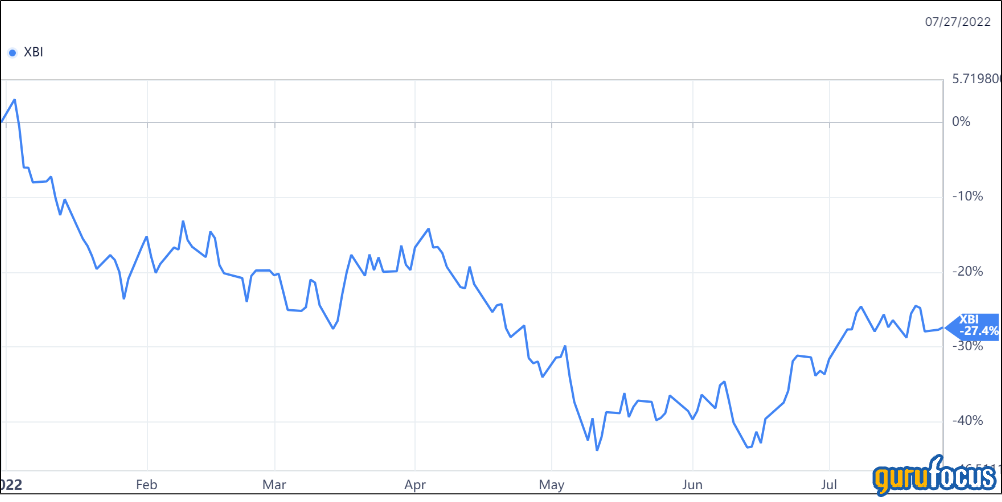 The 14-day relative strength index of 54.94 indicates the ETF is neither overbought nor oversold.

TSE:2413, Financial), dedicating 0.61% of the equity portfolio to the holding. The stock traded for an average per-share price of 4,217.22 yen ($30.73) during the quarter.
The Japanese company, which provides a variety of medical services through the internet, has a market cap of 2.60 trillion yen; its shares closed at 3,833 yen on Tuesday with a price-earnings ratio of 40.78, a price-book ratio of 10.10 and a price-sales ratio of 12.51.
According to the GF Value Line, the stock is significantly undervalued currently. 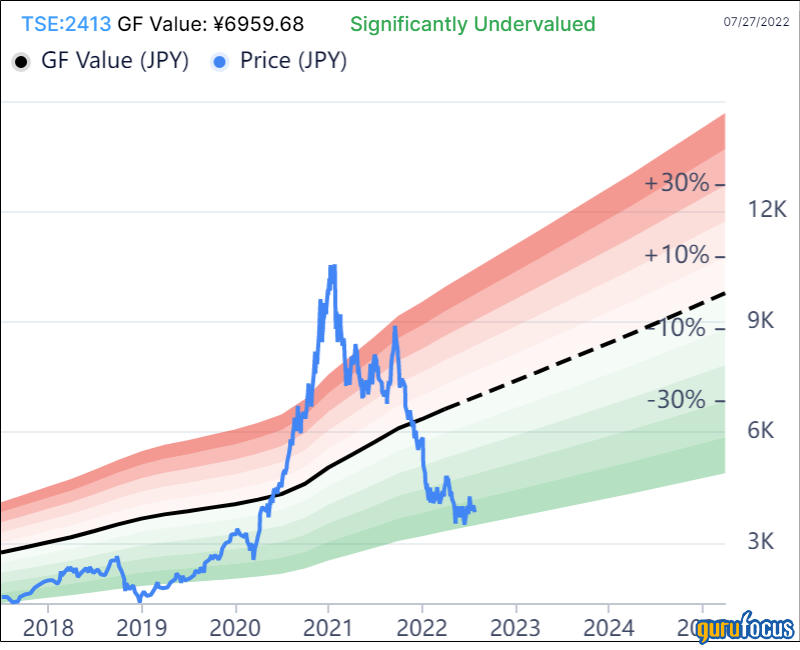 M3’s financial strength and profitability were both rated 10 out of 10 by GuruFocus. In addition to a comfortable level of interest coverage, the robust Altman Z-Score of 22.81 indicates the company is in good standing. The ROIC also eclipses the WACC, so value creation is occurring.
The company is also being supported by operating margin expansion, strong returns that top a majority of industry peers and a moderate Piotroski F-Score of 6. Consistent earnings and revenue growth contributed to M3’s 4.5-star predictability rank. GuruFocus found companies with this rank return an average of 10.6% annually.
With 0.03% of its outstanding shares, Eaton Vance is the company’s largest guru shareholder. Other guru investors are the iShares MSCI ACWI ex. U.S. ETF and the

The company headquartered in Wayne, Pennsylvania, which manufactures surgical supplies and medical devices, has a $12.38 billion market cap; its shares were trading around $263.93 on Wednesday with a price-earnings ratio of 25.65, a price-book ratio of 3.28 and a price-sales ratio of 4.44.
Based on the GF Value Line, the stock appears to be significantly undervalued currently. 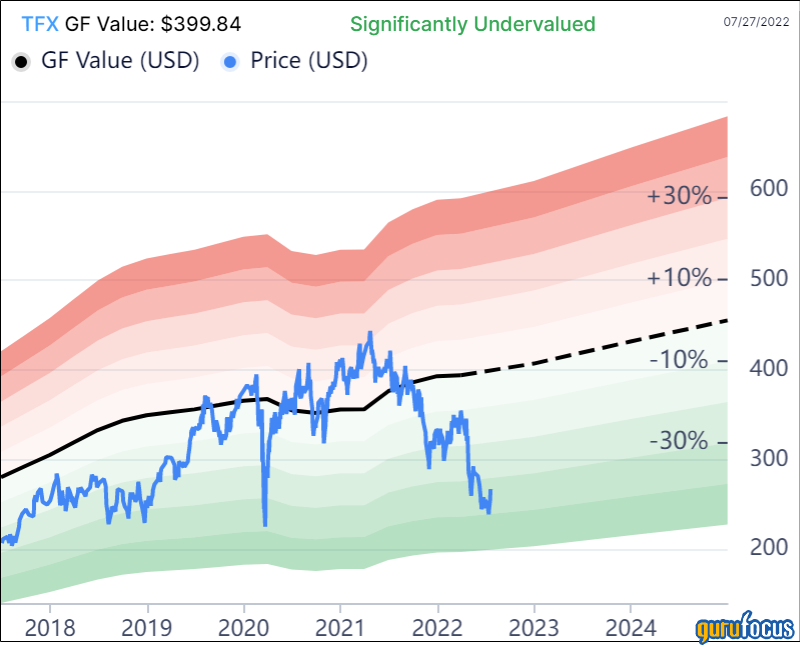 GuruFocus rated Teleflex’s financial strength 6 out of 10, driven by adequate interest coverage and a high Altman Z-Score of 3.98. Assets are building up at a faster rate than revenue is growing, however, indicating it may be becoming less efficient.
The company’s profitability fared a bit better, scoring an 8 out of 10 rating on the back of operating margin expansion and strong returns that are outperforming versus competitors. Teleflex also has a high Piotroski F-Score of 8, meaning business conditions are healthy, and a one-star predictability rank.
The

Vanguard Health Care Fund (Trades, Portfolio) has the largest stake in Teleflex with 2.60% of its outstanding shares. Other notable gurus that own the stock include

The Chicago-based medical device company, which manufactures pacemakers, implantable cardiovascular defibrillators, stents, catheters and other equipment, has a market cap of $190.56 billion; its shares were trading around $108.83 on Wednesday with a price-earnings ratio of 22.72, a price-book ratio of 5.38 and a price-sales ratio of 4.25.
The GF Value Line suggests the stock is modestly undervalued currently. 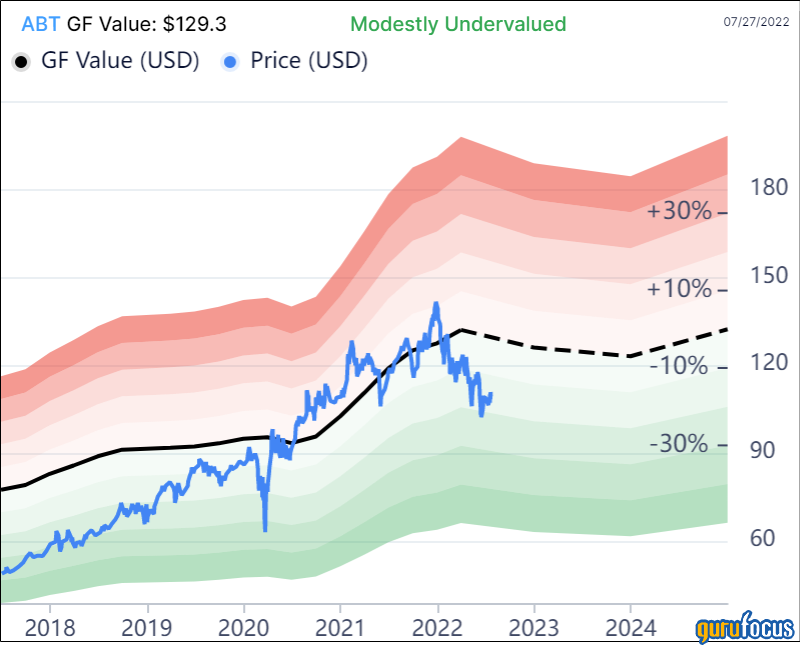 Abbott’s financial strength was rated 7 out of 10 by GuruFocus. In addition to a comfortable level of interest coverage, the high Altman Z-Score of 4.82 indicates the company is in good standing. Additionally, the ROIC exceeds the WACC, so value is being created.
The company’s profitability scored a 9 out of 10 rating due to an expanding operating margin, strong returns that outperform a majority of industry peers and a high Piotroski F-Score of 9. Abbott Labs also has a one-star predictability rank.
Of the many gurus invested in Abbott Laboratories, Fisher has the largest stake with 0.52% of its outstanding shares.

Mairs and Power (Trades, Portfolio) and the

MS Global Franchise Portfolio (Trades, Portfolio) also have significant positions in the stock.
Additional trades and portfolio performance
During the quarter, the fund also cut back its holdings of AbbVie Inc. (

ACCD, Financial) position.
Eaton Vance’s $1.08 billion equity portfolio, which is composed of 49 stocks, is largely invested in the drug manufacturing industry with a weight of 46.73%.