The psychology behind US politics | ASU News – ASU News Now

When it comes to politics and partisanship, what is going on in the minds of U.S. voters today?
That’s the question Arizona State University faculty discussed during a virtual roundtable event held this week.
“U.S. Elections From a Political Psychological Perspective” took place on Oct. 4, ahead of November’s midterm elections.
Moderator Victor Peskin, an associate professor at ASU’s School of Politics and Global Studies, was joined by other professors from the school for a panel that touched on issues such as extreme partisanship, a multiparty system and the potential path to unity.
Political polarization was one of the overarching themes of the hourlong talk.
The panel said that polarization is inherent in what is essentially a two-party political system. In contrast, some countries such as Switzerland (four main political parties) or Germany (five or more) offer voters more choices.
Peskin asked if a multiparty system might change the current polarization and dynamic of political psychology seen in recent years.
Matthew Dempsey, lecturer at ASU’s School of Politics and Global Studies, doesn’t see that happening.
“There will never be more than two parties in the U.S.,” said Dempsey, who worked on political campaigns prior to coming to ASU. “It’s the rules of the game. I agree that a two-party system sets up more polarization than a multiparty system would. But it is a futile discussion.”
The panelists cited studies that show that political leanings often have more to do with identity than ideals.
“So how do we know if people choose their party based on their beliefs or their beliefs based on their party?” Peskin asked.
For many, social identity trumps values when it comes to embracing a particular party, explained several of the panelists. Individuals may first choose a party and then, without consideration or contemplation, accept that party’s platform as their own.
“It’s more driven by social identities than actual ideological agreements,” said Fabian Neuner, assistant professor at ASU’s School of Politics and Global Studies.
Family ties also can influence political partisanship. Like DNA, most families seem to share the same political leanings.
“Going back historically, what we know about parties is that people get their partisanship really early in life — from their parents,” said Foundation Professor Kim Fridkin, citing a study on the political affiliations of several generations within a family. “It is stable and becomes part of their social identity.”
When it comes to the 2020 election, the question was asked: How do we understand the belief that the election was stolen?
“Some people genuinely believe the election was stolen,” said Neuner, who studies political psychology, political behavior and public opinion in the U.S.
“Others know it was not stolen,” he said, but believe it would “reflect badly on their party to voice that. So they give an opinion that they know is incorrect.”
Neuner also explained how some people will engage in expressive responding — the process of participating in a survey and knowingly providing insincere responses to advance partisan goals.
“This poses a problem because we can’t just take people at face value. We have to question the motivations in these responses,” Neuner said.
The phenomenon of politically segregated geographical areas was also brought up.
“The problem we’ve been seeing in the past 20 years or so … we’re finding counties are becoming more and more slanted towards one party or the other, thus your neighbors are going to be more like you, at least politically speaking,” Dempsey said. “We are actually siloing ourselves in our own neighborhoods.”
That idea also extends to people listening to media outlets that espouse only their ideals.
Today, people have a lot more choices about where they will get information, said Fridkin, who teaches cognition and emotions in political thinking.
“When I was growing up, there were only a few TV stations … everyone was watching the same thing, everyone was reading the same information, everyone had the same set of facts,” she said.
Fridkin developed a theory called the “citizen-centered theory of campaigns” that’s based on the idea that the abundance of political information available to voters today can make them more active and, at the same time, only focus on information they want to seek out and retain.
Peskin asked the panelists if any crisis or domestic or international threat to the U.S. might bring a positive shock to our political system and rekindle a sense of collective national identity, where polarization would decrease and rhetoric might be softer and more gentle.
Neuner responded by saying that even another outside threat, like 9/11, would not diminish the country’s division and create a sense of unity. Instead, it would become an opportunity to shift blame to the other party.
“There will always be someone, somewhere within a political party, who will try to use that for political gain.”
Top image by Tara Winstead via Pexels 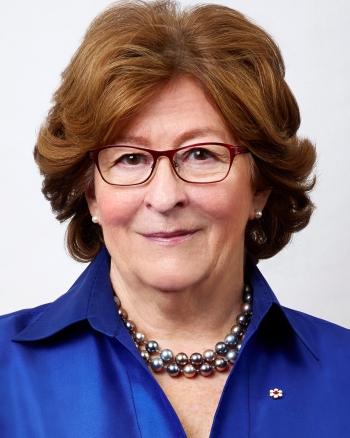 The Honorable Louise Arbour, recipient of the 2022 O'Connor Justice Prize Download Full Image
“I’m extremely honored to receive this accolade. I think there’s nothing like recognition by your peers,” Arbour said. “I think it’s very significant, and the association with one of the greatest jurists in the United States, a woman for whom I have a lot of admiration. I feel very humbled and very honored.”
Arbour was appointed by the security council of the U.N. as chief prosecutor for the international criminal tribunals for the former Yugoslavia and for Rwanda in 1996. In this role, she secured the first conviction for genocide — in response to the 1994 Rwandan Civil War — since the 1948 Genocide Convention and the first indictment for war crimes by a sitting European head of state, Serbian President Slobodan Milosevic.
“Since the Nuremberg trials, there had never been any other effort or opportunity to set up an international criminal mechanism of accountability for heads of states or military-political leaders involved in severe violations of international humanitarian law, the laws of war, genocide, crimes against humanity,” Arbour said.
In 1999, she resigned to take up the prestigious appointment to the Supreme Court of Canada, serving until 2004 when she was asked to return to the U.N. as the high commissioner for human rights.
During her service for the U.N., Arbour has worked to expand the understanding and application of international criminal law, human rights and accountability.
Most notably under her leadership, the Commission on Human Rights transformed into the Human Rights Council, creating a mechanism for accountability called Universal Periodic Review, which places each member state of the U.N. under scrutiny for its actions.
Arbour will be presented with the O’Connor Justice Prize in a ceremony in early 2023.
Previous recipients of the O’Connor Justice Prize include: