Facebook
Twitter
Google+
YouTube
LinkedIn
RSS
Very few of us escape childhood unscathed by one thing or another — divorce, abuse, bullying, and poverty all inflict trauma. However, influencer and mental health advocate Madison Little has endured more than your average person. 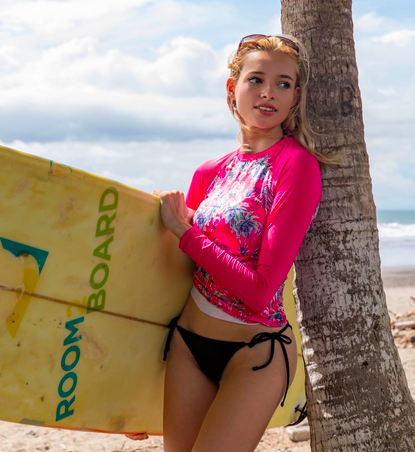 At just four years old, Little watched her father murder her mother. She moved around from home to home, living with her aunt and uncle, her grandmother, and then a friend’s family before setting out on her own. Little’s traumatic past has informed her bright future, however. Knowing that her story could help people like her, and coupled with an interest in mental health advocacy, Little set out to be an inspiration to others in their dark times.
Following her mother’s death and her father’s incarceration, Little struggled with how to internalize and deal with what she had witnessed. Her emotions manifested in bad behavior: she broke her aunt’s pinkie finger and often had to be carried out of her daycare room because she was sobbing uncontrollably. Things did not improve as she grew older, and finding they could not control her, her twenty-something aunt and uncle shipped Little off to her grandmother.
“My grandmother could put up with me. She knew how to deal with me the way that you would deal with kids in the 60s,” explains Little, “but the generational gap was a huge barrier between us.”
Being a child growing up amid the spike in social media reliance, Little was constantly on TikTok and Snapchat. It was an obsession that her grandmother couldn’t wrap her head around.
“She told me ‘my kids would be outside playing in the yard from 8 am to 8 pm every day,’” Little recalls with a laugh.
By 11th grade, Little’s struggles regarding the generational divide between her and her grandmother mounted. She moved in with a friend she knew from camp, but that was short-lived. Little was still grappling with unresolved childhood trauma, which was rearing its ugly head with bad choices and issues with interpersonal relationships.
Upon graduation, knew that she had to take control of her future. So, she decided to ultimately do something meaningful with all of the trauma she still held inside.
“I realized childhood trauma is something to be worked through,” she says. “It will push you to be stronger in the long run.”
With 100,000 TikTok followers in her back pocket and a spark of an idea to inspire others to tackle their trauma in a healthy manner, Little set off for Los Angeles.
“I figured that even though I don’t know anyone, I don’t know how to do anything, I have no degree, and I don’t know how to be an inspiration to this world,” Little says, “but if there’s anywhere I’m gonna learn how to be an inspiration, it would be in LA.”
Little hopped on a plane and landed in LA without a real idea of what she was doing. Once settling in, she began reaching out to people in the most comfortable way for her: through TikTok.
Through her “Hey Babe” videos, Little has tapped into something her generation seems to have been craving: someone who checks in with them, asks if they’re ‘ok,’ and shares similar feelings — whether those be anxiety, social pressure, depression, or fear of what the future holds. The videos resonated with TikTok viewers, and Little quickly amassed nearly 1 million followers on the platform.
“I’ve created a community that supports each other and is there for each other. That’s evident in the comments section,” says Little.
Little acknowledges that a lot of negative can come with social media, especially within the influencer space. There’s a strong focus on staying relevant, gathering likes, and appealing to a broad range of people. Nevertheless, Little feels the best way she can advocate for her peers’ mental health wellness is by simply “checking in.” Her videos are like sitting down and talking to a friend, and she has found success on TikTok and Instagram by being a calming influence amid the noise.
Little begins her videos asking people to “turn their phones” and “come a little bit closer,” creating an intimacy not often experienced on a platform full of dance challenges and pranks.
In addition to her robust TikTok presence, Little has kicked off her own life coaching business. The “Coaching Boost” specializes in working with people to help them be empowered to make big life changes. Little became a Certified Life Coach in 2021 and has been successfully coaching clients in the Los Angeles area. By taking her business online, Little hopes to have a further reach and give people more accessibility to her services. Clients who sign up for Maddie’s Coaching Boost can choose to receive guidance with their career, relationships, life in general, or a “mindset shift”.
“Coaching is the best way to shift your mindset,” Little says on her site, “Your coach will be by your side to help you plan for your future, upgrade your career or just simply help organize your mind.”
Little is still working on herself, as well. She is going back to school at LA Film School to study the entertainment business and continues to build her unique platform online.
“This is your ‘word of advice,’” she said on her post announcing her school return. “Shoot your shot. It’ll make things better.”
Madison Little can be found on TikTok @maddiejameslittle and on Instagram @_maddielittle

ElizaBeth Taylor is a journalist for Times Square Chronicles and is a frequent guest at film, fashion and art events throughout New York City and Los Angeles due to her stature as The Sensible Socialite.Passionate about people ElizaBeth spent many years working as a travel reporter and television producer after graduating with high honors from University of Southern California. The work has afforded her the opportunity to explore Europe, Russia, South America, Asia, Australia and the Middle East. It has greatly influenced the way in which ElizaBeth sees a story and has created a heightened awareness for the way people around the world live today.
T2C is the go to place for the best-kept secrets and latest up-dates for the tourist but for Hell’s Kitchen, Clinton and Times Square this is their neighborhood. Times Square may be the tourist hotspot of North America, but New York residents are the community members who live and breathe city life and make dedicated readers.
Copyright © 2014 Times Square Chronicles