Taking the prescribed action: The healthcare providers who protect our children's present are riding to protect their future – World Health Organization

Experts from the World Health Organization (WHO), Dr Diarmid Campbell Lendrum and Dr Samantha Pegoraro will be joining a group of paediatricians and other health professionals cycling from Geneva, Switzerland to Napoli, Italy to “Ride for Their Lives.”

The 1500km ride, departing Geneva, Switzerland on 18 October, is being joined by health professionals from around the world to call attention to the climate and air pollution crises, and their devastating effects on the health and future of our children.  They will deliver the Healthy Climate Prescription Letter and a call for a Fossil Fuel Non-Proliferation Treaty to the UN Climate Change Conference, COP27 in Egypt.

“I am excited to be getting on my bike for ‘Ride for their Lives’ to help highlight the health impacts of the climate crisis, and the death that is caused every 5 seconds by air pollution said Dr Diarmid Campbell-Lendrum, WHO Unit Head, Department of Environment, Climate Change and Health. WHO is calling on governments to lead a just, equitable and fast phase out of fossil fuels, to achieve a clean energy future that will protect our planet, and ensure longer, healthier lives.”

The Healthy Climate Prescription letter, signed by organisations representing 46 million health workers worldwide, calls on all governments and world leaders “to avert the impending health catastrophe by limiting global warming to 1.5°C, and to make human health and equity central to all climate change mitigation and adaptation actions.”  The call for a Fossil Fuel Non-Proliferation Treaty, from WHO, hundreds of health institutions and over 1400 health workers, is calling on governments to urgently agree to a legally binding plan to phase out fossil fuel exploration and production, to end global dependence on fossil fuels.

Air pollution is one of the biggest environmental threats to human health, alongside climate change. Almost 99% of the world’s population live in places where air pollution levels exceed WHO guidelines. UNICEF estimates that approximately one billion children – nearly half of all children in the world – are at ‘extremely high risk’ of impacts from the climate crisis.

“Every human has the right to clean air,” said Dr Samantha Pegoraro, Technical Officer, Department of Environment, Climate Change and Health. “Children are disproportionally affected as their lungs and brains are still developing. Poorer children are most exposed, increasing the impact of social inequalities.”

“Action speaks louder than words, we need to reduce air pollution and encourage sustainable transport, active mobility and physical activity.”  Added Dr Pegoraro who is also joining the ride from Geneva to Aigle.

Globally, air pollution kills an estimated 7 million people a year, contributing to respiratory conditions like asthma, lung cancer and heart disease.  WHO recently tightened guidelines on air pollution levels, describing it as “on a par with other major global health risks such as unhealthy diet and tobacco smoking.”

Ride for Their Lives launched in October 2021 when children’s hospital staff and health sector leaders cycled from Geneva via London to COP26 in Glasgow. They delivered both the Healthy Climate Prescription letter, and WHO’s COP26 Special Report on Climate Change and Health to government delegates from both the COP26 and the COP27 presidencies. Building on the success, this year the campaign has gone global, and, in the lead up to COP27, there are many rides taking place in the UK and abroad. The riders are entirely self-funded showing their dedication to inspire action. 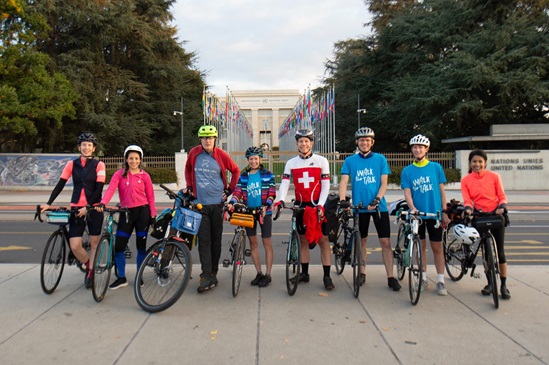 The ride will depart from the Palais de Nations in Geneva, Switzerland on the morning of 18 October with at WHO before heading off to Aigle then Brig also in Switzerland. The healthcare providers are then cycling though Italy to Napoli, connecting hospitals along the way.

Subscribe to our newsletters →
Media Contacts
WHO Media inquiries